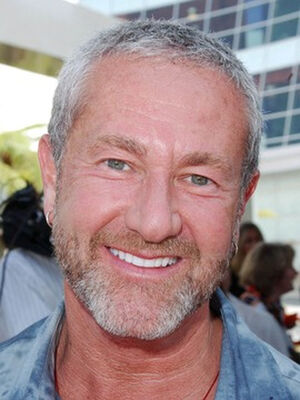 Charles Michael "Charlie" Adler (born October 2, 1956) is an American voice actor and voice director. As a voice actor he has voiced many well-known characters including both of the titular characters from the Cartoon Network original series, Cow and Chicken. He was also a dialogue director on Oscar-nominated movies Jimmy Neutron: Boy Genius and The Wild Thornberrys Movie.

His first professional acting job was in a commercial in 1971. After that, he took a break from acting. During this time, Adler worked a variety of jobs, including waiter, janitor, paper delivery man, floor stripper, house painter, remedial reading teacher and caretaker for an Episcopal church.

In 1984 and 1985, he starred as Arnold Beckoff in Torch Song Trilogy, for which he was nominated for the 1985 Helen Hayes Best Actor Award, in New York, before moving to California in 1986. His first animation role was recorded in New York, voicing Spike the Dragon in the My Little Pony television movie, Rescue at Midnight Castle.

In 1985, after convincing the head of the Abrams, Rubiloff and Lawrence agency to allow him to audition for their voice over department, he went to a private audition for Ginny McSwain and Arlene Thornton. An agent had praised him in front of them as "the next Frank Welker." Despite the fact that McSwain recalls that he blew their minds, Adler recalls them having "no interest in him". Having no demo, they arranged for him to record an audition. Charlie Adler improvised characters on the spot during the tape, which impressed both McSwain and Thornton, however left him so embarrassed with his behavior that he performed with his back to them and his face hidden with a hat and sunglasses.

His voice acting career had taken off with a bang, Adler landed the roles of Nat Smurfling on the fourth season of Hanna-Barbera's Smurfs, Rowdy Roddy Pipper on Hulk Hogan's Rock 'n' Wrestling, Silverbolt on The Transformers and the unsympathetic role of Eric Raymond, the main villain on Jem.

After playing the transvestite Ralph/Rita in the short-lived sitcom The Redd Foxx Show, he was completely dissatissfied with working on a TV series and how "you spend your whole life going, 'God, I just want to be in a TV show and have a parking space'. Then I got it and it was just so not what I wanted to do." That is when animation "grabbed him".

He then became very active in animation, his roles include reprising Spike in the My Little Pony television series, Low-Light in G.I. Joe, the semi-regular role of Mr. O'Greasy in A Pup Named Scooby-Doo, Deputy Fuzz and Ted Hex in Bravestarr, Captain Caveman's son Cavey Jr. in The Flintstone Kids, Pinky Dalton in The Good, the Bad, and Huckleberry Hound, Quark and Zappy in Rockin' with Judy Jetson, The Hamburglar in a few McDonald's commercials, Mad Dog, Hacksaw and Howard Huge in TaleSpin, Dripple in Tom and Jerry Kids, and the sympathetic title character, The bear from darkest Peru in Hanna-Barbera's version of Paddington Bear.

In 1990, he lent his voice to Buster Bunny on Tiny Toon Adventures, however during season 3 in 1992, he walked off the series for unknown reasons. The show's producer Tom Ruegger recalled that he and voice director Andrea Romano really insisted Steven Spielberg cast Adler, due to him bringing "a great deal of energy" to Buster. Charlie Adler has never discussed the circumstances, which led to his leaving Tiny Toons. In an interview with a fan site, Ruegger commented on the difficulties with keeping Adler to be consistent to the role of Buster Bunny, due to his voice going over the top. However, Tom Ruegger stated that the reason for the actor's departure was the fact, he hadn't been cast in Warner Bros. Animation's following project Animaniacs. A decision which forced Adler and his agent to write "angry letters of resignation to Steven Spielberg and others."

In 1993, he went on to portray Chance 'T-Bone' Furlong in Swat Kats: The Radical Squadron, which went on to be the number one syndicated show of 1994, Bill in The Terrible Thunderlizards, Ickis on Aaahh!!! Real Monsters, Ed Bighead, Bev Bighead and others on Rocko's Modern Life, Stalker Slaughter on Captain Planet and the Planeteers and Screwball Squirrel and reprising his role of Dripple on Droopy, Master Detective.

In 1995, he voiced several characters on multiple What a Cartoon! episodes, such as "Gramps", "Awfully Lucky", "Yoink! of the Yukon" and "No Smoking". In "No Smoking" , he played Cow, Chicken and The Red Character. "No Smoking" was a pilot created by David Feiss, which was greenlit to be a series in 1997 with Adler on board to reprise his characters, which now included a new character I.R. Baboon for a new segment within the show. The hit program Cow and Chicken ran from 1997-1999, receiving multiple awards and nominations, including an Annie Award for Outstanding Individual Achievement for Voice Acting in an Animated Television Production for Adler as Cow.

His voice directing career began in the late 1990s with Rugrats and continued with other Klasky Csupo franchises. Adler has since directed The Wild Thornberrys, All Grown Up, The Marvelous Misadventures of Flapjack, The Replacements and many more.

He also voiced Dr. Peacock in the Froot Loops commercials, Patrick Winks and Mr. Hornsby on Jakers! The Adventures of Piggley Winks, SAVO on Danger Rangers and Mr. Whiskers in Brandy & Mr. Whiskers.

In 2002, he directed his own short movie No Prom for Cindy in which he also played the title character. He was awarded the Palm Springs International Festival of Short Films Jury Award of Merit.

In 2007, he voiced in Michael Bay's live-action Transformers film series, providing the voice of Starscream after having voiced the characters of Silverbolt and Triggerhappy in original Transformers series.

As of 2013, Adler is currently playing Professor Barney T. Hokestar in Ben 10 Omniverse and MODOK in Avengers Assemble, and is also directing Bubble Guppies.