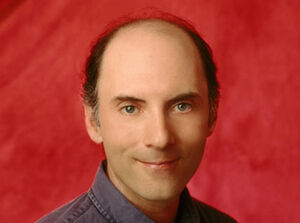 Daniel Louis "Dan" Castellaneta' (born October 29, 1957) is an American actor, voice actor, comedian and screenwriter. Noted for his long-running role as Homer Simpson on the animated television series The Simpsons, he voices many other characters on The Simpsons, including Abraham "Grampa" Simpson, Barney Gumble, Krusty the Clown, Groundskeeper Willie, Mayor Quimby and Hans Moleman.

Born in Oak Park, Illinois, a suburb of Chicago, Castellaneta started taking acting classes at a young age. He would listen to his father's comedy records and do impressions of the artists. After graduating from Northern Illinois University, Castellaneta joined Chicago's Second City in 1983, and performed with the troupe until 1987. He was cast in The Tracey Ullman Show, which debuted in 1987. The Tracey Ullman Show included a series of animated shorts about a dysfunctional family. Voices were needed for the shorts, so the producers decided to ask Castellaneta to voice Homer. His voice for the character started out as a loose impression of Walter Matthau, but later evolved into a more robust voice. The shorts would eventually be spun off into The Simpsons. Castellaneta has won four Primetime Emmy Awards for Outstanding Voice-Over Performance for his work on the show as well as an Annie Award for Outstanding Individual Achievement in the Field of Animation in 1993. Castellaneta has co-written four episodes of The Simpsons with his wife Deb Lacusta.

Castellaneta has also had roles in several other television programs, including the live-action sitcom Sibs, The Adventures of Dynamo Duck, and the animated series Back to the Future: The Animated Series, Earthworm Jim, Aladdin, Hey Arnold!, Darkwing Duck and Cow and Chicken. In 1999, he appeared in the Christmas special Olive, the Other Reindeer and won an Annie Award for his portrayal of the Postman. Castellaneta has also released a comedy CD, I Am Not Homer, and wrote and starred in a one-person show titled Where Did Vincent van Gogh?

Castellaneta was born in Oak Park, Illinois, a suburb of Chicago, on October 29, 1957, to Elsie and Louis Castellaneta. His father was an amateur actor who worked for a printing company. Castellaneta became adept at impressions at a young age and his mother enrolled him in an acting class when he was sixteen years old. He would listen to his father's comedy records and do impressions of the artists. He was a "devotee" of the works of many performers, including Alan Arkin and Barbara Harris and directors Mike Nichols and Elaine May. He attended Oak Park and River Forest High School and upon graduation, started attending Northern Illinois University (NIU) in the fall of 1975. He studied art education, with the goal of becoming an art teacher. He became a student teacher and would entertain his students with his impressions. Castellaneta was also a regular participant in The Ron Petke and His Dead Uncle Show, a radio show at NIU. The show helped Castellaneta hone his skills as a voice-over actor. He recalled "We did parodies and sketches, we would double up on, so you learned to switch between voices. I got my feet wet doing voiceover. The show was just barely audible, but we didn't care. It was the fact that we got a chance to do it and write our own material." He took a play-writing class and auditioned for an improvisational show. A classmate first thought Castellaneta would "fall on his face with improvisation" but soon "was churning out material faster than [they] could make it work."

Castellaneta started acting after his graduation from Northern Illinois University in 1979. He decided that if his career went nowhere he would still have a chance to try something else. He began taking improvisation classes, where he met his future wife Deb Lacusta. Castellaneta started to work at The Second City, an improvisational theatre in Chicago, in 1983 and continued to work there until 1987. During this period, he did voice-over work with his wife for various radio stations. He auditioned for a role in The Tracey Ullman Show and his first meeting underwhelmed Tracey Ullman and the other producers. Ullman decided to fly to Chicago to watch Castellaneta perform. His performance that night was about a blind man who tries to become a comedian and Ullman later recalled that although there were flashier performances that night, Castellaneta made her cry. She was impressed and Castellaneta was hired.

Castellaneta is most famous for his role as Homer Simpson on the long-running animated television show The Simpsons. The Tracey Ullman Show included a series of animated shorts about a dysfunctional family. Voices were needed for the shorts, so the producers decided to ask Castellaneta and fellow cast member Julie Kavner to voice Homer and Marge Simpson rather than hire more actors. Homer's voice began as a loose impression of Walter Matthau, but Castellaneta could not "get enough power behind that voice" and could not sustain his Matthau impression for the nine- to ten-hour long recording sessions. He tried to find something easier, so he "dropped the voice down", and developed it into a more versatile and humorous voice during the second and third season of the half-hour show. Castellaneta's normal speaking voice has no similarity to Homer's. To perform Homer's voice, Castellaneta lowers his chin to his chest, and is said to "let his IQ go." Castellaneta likes to stay in character during recording sessions, and tries to visualize a scene in his mind so that he can give the proper voice to it. Despite Homer's fame, Castellaneta claims he is rarely recognized in public, "except, maybe, by a die-hard fan."

Castellaneta has won several awards for voicing Homer, including four Primetime Emmy Awards for "Outstanding Voice-Over Performance" in 1992 for "Lisa's Pony", 1993 for "Mr. Plow", 2004 for voicing several characters in "Today I Am a Clown", and 2009 for voicing Homer in "Father Knows Worst". In 1993, Castellaneta was given a special Annie Award, "Outstanding Individual Achievement in the Field of Animation", for his work as Homer on The Simpsons. In 2004, Castellaneta and Julie Kavner (the voice of Marge) won a Young Artist Award for "Most Popular Mom & Dad in a TV Series". Homer was placed second on TV Guide's 2002 Top 50 Greatest Cartoon Characters, and in 2000, Homer and the rest of the Simpson family were awarded a star on the Hollywood Walk of Fame located at 7021 Hollywood Boulevard.

Castellaneta has been a regular cast member in several other television series. In 1991, he played Warren Morris in the short-lived ABC live-action sitcom Sibs. Heide Perlman, creator of Sibs, wrote the part with Castellaneta in mind. He also provided the voice of the eponymous character in The Adventures of Dynamo Duck, Megavolt in Darkwing Duck, "Doc" Emmett Brown in Back to the Future: The Animated Series, the lead character in Earthworm Jim and several characters, including Grandpa Phil and the mentally unstable ice cream truck driver, on Nickelodeon's Hey Arnold!. He guest starred as The Robot Devil in three episodes of Futurama, as well as the film The Beast with a Billion Backs.

Castellaneta has also made guest appearances in a number of television series episodes. In 1992, he guest-starred in an episode of the legal drama L.A. Law, as a Homer Simpson meetable character at a California amusement park who is dismissed for inappropriate behavior while in costume. In 2005, he appeared in the episode "Sword of Destiny" in Arrested Development as Dr. Stein, a deadpan incompetent doctor. In 2005, Castellaneta guest-starred as Joe Spencer in the Stargate SG-1 season eight episode "Citizen Joe". He also appeared in episodes of ALF, Campus Ladies, Castle, Entourage, Everybody Loves Raymond, Frasier, Friends, Greek, How I Met Your Mother, Mad About You, Married... with Children, Murphy Brown, NYPD Blue, Parks and Recreation, Reba, Reno 911!, That '70s Show, Veronica Mars, Yes, Dear, and Desperate Housewives.

He appeared as the Genie in the Aladdin sequel The Return of Jafar and on the 1994 Aladdin television series. The Genie has been voiced by Robin Williams in Aladdin, and Castellaneta described replacing him as "sort of like stepping into Hamlet after Laurence Olivier did it, how can you win?" He also provided Gene's voice in the Kingdom Hearts video game series. [8] Castellaneta portrayed Aaron Spelling in the 2004 NBC film Behind the Camera: The Unauthorized Story of Charlie's Angels, which followed the true story of how Spelling created the show. Other films in which Castellaneta has appeared include Nothing in Common, Say Anything..., Super Mario Bros., The Client, Space Jam, My Giant, Rugrats in Paris: The Movie, Recess: School's Out, Hey Arnold!: The Movie, The Cat in the Hat and The Pursuit of Happyness. In 2000, he won an Annie Award for his portrayal of the Postman in the animated Christmas television special Olive, the Other Reindeer. In 2006, he appeared in Jeff Garlin's independent film I Want Someone to Eat Cheese With along with several other Second City alumni.

On February 22, 2000, his first music CD Two Lips was published. It was followed on April 23, 2002 by his first comedy CD, I Am Not Homer, in which he and his wife perform several comedy skits. The majority of the sketches had been written and performed before the CD was recorded, and Castellaneta thought that it would be a good idea to preserve them "since [he and Lacusta] don't perform them much anymore." Some came from their sketch series on a local radio station in Chicago and had to be lengthened from the "two-minute bits" that they were originally, while several others were stage sketches performed in a comedy club in Santa Monica. Additionally, "Citizen Kane", a sketch in which two people discuss the film Citizen Kane with different meanings, was something the pair had performed at an art gallery. Castellaneta noted that "we already knew that these skits were funny, [but] some of them we polished and tightened." The skits were principally written by improvising from a basic point, transcribing the results and then editing them to the finished scene. Castellaneta chose the title I Am Not Homer as a parody of Leonard Nimoy's famous first autobiography I Am Not Spock, as well as to show that most of the comedy featured "is not the typical Homer comedy."

Alongside his television and film work, Castellaneta has appeared in a number of theatrical productions. In 1992, he starred in Deb & Dan's Show alongside his wife. In 1995, Castellaneta started writing Where Did Vincent van Gogh?, a one man play in which he portrays a dozen different characters, including artist Vincent van Gogh. He first officially performed the play at the ACME Comedy Theatre in Los Angeles in 1999. In 2007, he appeared in The Bicycle Men at The King's Head Theatre in London.